BETWEEN TRADITION AND MODERNITY

A workshop in the birthplace of tapestry

The history of tapestry is almost as old as humanity ! However, in Aubusson and in Felletin, the first references to arts and crafts date back to the XVth century after the reconversion of the local clothing industry, bringing along the textile know-how, skilled workforce and already well-established clientele.

In the XVIth century, the tapestry makers of ‘la Marche’ adopt the genres after the fashion of Arras or Flanders : ‘verdure’ – stylized foliage or forest scenes – cabbage leaves, birthworts, millefleurs and landscapes with fantastic and enigmatic beasts inspired by religion and hunting.

The XVIIth century is marked by the ‘great’ tapestry of figures and represents narratives in the style of the century.

At the same time, the State intervenes in the organization of the local production :

1601 : a royal Edict limits the importation of tapestries from Flanders.

1665 : Colbert grants Aubusson workshops the status of Royal Manufacture. He does the same for Felletin in 1689.

1685 : The Revocation of the Edict of Nantes upsets the tapestry industry because of the departure of hundreds of Protestant weavers. 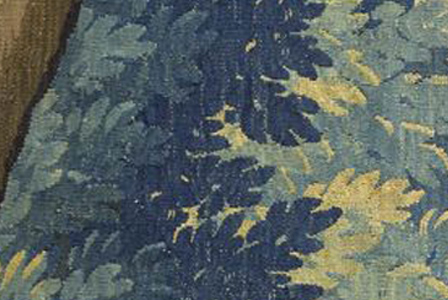 In the XVIIIth century, the large genre scenes are abandoned in favour of secular, decorative, colourful and simple scenes : children playing, peasant life, oriental scenes, chinoiserie decoration, after the fashion of exotic taste. The mythology is reintegrated in a gallant style and tapestries are made after the classical themes of Boucher, Watteau, Oudry or Huet…

In the XIXth century, the new craze for interior decoration leads the weaving industry to create greater companies which can meet the demands of a new private clientele. Meanwhile large manufactures develop to make wall paper, the wall tapestry production being limited to various uses. The decorations of those tapestries are not very innovative : seat covers, tapestried furniture, ‘portieres’ and valances.

Nevertheless, it is the great age of the velvety carpet with a short pile.

1884 : Decorative and technical experiments multiply with the creation of the National School of Decorative Arts.

During the XXth century, there is a renewal of tapestry work. Two currents tend to win distinction without being opposed : on one hand, Jean Lurçat and his followers, the ‘cartonniers’ rethink the way to make a tapestry and simplify the process thanks to the device of a numbered card system for each colour and a code number.